As the brain ages, it is more susceptible to Alzheimer disease and related dementia. The process by which AD develops begins decades before even the first signs of disease are present. Interventions that can potentially prevent these outcomes require the identification of biological markers of accelerated aging of the brain early in life.

Thanks to continued funding from the Djavad Mowafaghian Centre for Brain Health’s Alzheimer Disease Research Grants, our researchers are able to continue investigating new ways to better diagnose and treat AD. Below are updates from the research teams who were awarded funding in 2021.

This project is using large-scale datasets to identify environmental factors that can accelerate or delay brain aging. The goal of this research is to develop a new set of research and clinical tools to help identify individuals who might benefit from early intervention to delay or prevent age-related brain deterioration that can be seen in Alzheimer disease.

Dr. Frangou and her team have recently released CentileBrain, which is an open science web-based platform that provides brainAGE estimates using a computational model that is widely accessible to researchers anywhere in the world. BrainAGE (Brain-Age-Gap-Estimate) is the difference between the chronological and biological age of the brain, with higher brainAGE values indicating accelerated aging.

A key feature of brain aging is the loss of tissue within the cortex of the brain. The cortex comprises layers of brain cells involved in the integration of information processing throughout the brain. Using a virtual histology approach, Dr. Frangou and her team examined gene expression related to cortical thinning in 14,000 healthy individuals and identified specific genes whose expression was associated with greater cortical thinning beginning at the age of about 50 years. These findings highlight specific pathways that can be further explored as possible targets for preventive treatments for those experiencing accelerated brain aging.

This project is examining why women with Alzheimer disease show smaller hippocampi, greater Alzheimer neuropathology, and steeper cognitive decline than men with AD. The team has already discovered different temporal dynamics in the regulation of the hippocampus’ capacity to form new neurons in adulthood. They are now studying whether a certain genotype and immune system signalling play a role in these observed differences.

The team recently found that neuroplasticity in the Alzheimer disease mouse model of sporadic AD differed by sex. This is a significant finding as sporadic AD is the most common genetic risk factor. In their early studies of the APOE4 genotype, they discovered that there are fewer neural stem cells in middle age in the APOE4 genotype, and that females show dramatic fluctuations in the ability of these stem cells to regenerate across time compared to males. These preliminary findings suggest that these neural stem cells in females may become more “exhausted,” and much earlier than males.

This research team is looking to determine navigational deficits associated with Alzheimer disease, an early marker of the disease. Human and animal models will take part in a physical maze that will become increasingly complex. The researchers will determine when study participants’ navigation capabilities become impaired, which would be the threshold at which brain dysfunction is evident. The end goal is to offer a diagnostic tool that can reliably detect the earliest signs of Alzheimer disease.

The Madhav lab has been hard at work developing the multi-faceted maze, complete with high-speed 3D tracking devices, projectors, computers and movable wall segments that can be reconfigured in real-time. The maze will accommodate the animal participants, as well as a robotic cart that will be operated by the human participants. With the final task design nearing completion, Dr. Madhav and his team will soon begin human trials, supported by Dr. Thalia Field who is currently recruiting participants for the study. 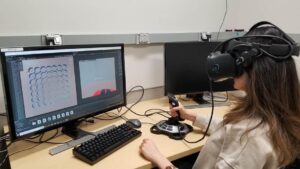 Human participants will use a virtual reality (VR) headset and joystick to drive the robotic cart through the physical maze.

Using state-of-the-art probes and mRNA analysis, this team continues to characterize the firing activity and gene-expression properties of specific neurons across different brain regions in animal models of Alzheimer disease. In this way, they hope to associate disease-related changes to specific cell types and gene expression, which would provide more specific targets for therapy.

Over the last year, Drs. Murphy and Cembrowski have begun to apply single-molecule multiplexed fluorescent in situ hybridization (mFISH) on the brain tissue as a first step towards application to mouse models of Alzheimer disease models to help identify AD-related cellular and molecular changes and to help interpret cellular activity across sites. They hypothesize that AD-related changes in laminar firing patterns can potentially be mapped to specific cell types and regional expression profiles of disease-associated genes. They also plan to use their findings to further optimize therapeutic multi-sensory stimulation to target specific brain regions or sub-populations of neurons. 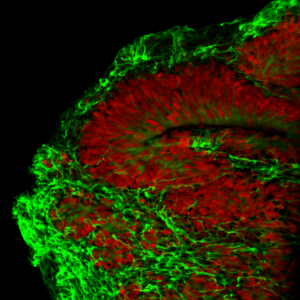 A cerebral organoid with layers resembling the human brain.

This project is looking to understand why clearing the brain of amyloid-beta deposits doesn’t resolve the clinical symptoms of Alzheimer disease, despite evidence that amyloid-beta plays a key role in disease development. By better understanding target molecules driving the expression of this protein, there are better opportunities to develop effective therapies.

Dr. Snutch has pioneered MinION, a new technology that can measure very subtle changes in the protein composition inside cells. Using 3D “organoids” made and maintained in the Nygaard lab, they will measure changes in human cells from patients with Alzheimer disease, compared to patients without dementia. Over the past few months, they have matured the organoids and processed tissue that Dr. Snutch will analyze using the MinION technology. They have also started validating and optimizing MinION for cerebral organoid tissue and, in the coming year, will begin their primary analysis.