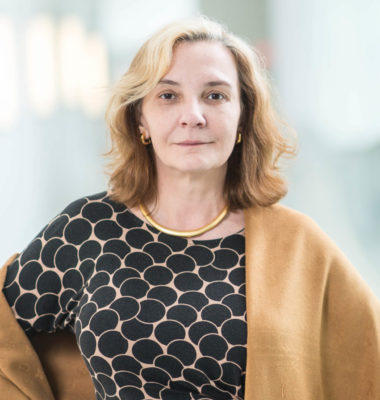 Dr. Frangou is a British psychiatrist who trained at Maudsley and Bethlem Royal Hospitals in London, UK and obtained her Master’s Degree and PhD from the University of London. She served as Professor of Psychiatry at the Department of Psychiatry at the Icahn School of Medicine at Mount Sinai in New York till 2013, having previously held the post of Reader in Psychiatry at the Institute of Psychiatry, Psychology and Neuroscience at King’s College London, UK. She is editor-in-chief of European Psychiatry, the journal of the European Psychiatric Association, and associate editor of Human Brain Mapping and BJPsych Open. Dr Frangou has received numerous awards including the 2019 Colvin Prize for Outstanding Achievement in Mood Disorder Research from the Brain and Behavior Research Foundation and the 2020 Mentor Award from the Society of Biological Psychiatry for her work in promoting women in academic psychiatry.

Dr. Frangou has more than 250 publications that have attracted over 17,000 citations (h-index: 72). She has made seminal contributions to the study of the human brain in health and disease and particularly in:

a) the characterization of the neural correlates of resilience to bipolar disorder and the identification of positive brain plasticity in high-risk individuals that remain unaffected (Journal of Neuroscience 2009; American Journal of Psychiatry 2017);

b) the adoption of a transdiagnostic focus in defining commonalities and differences in the brain correlates of psychiatric syndromes (Human Brain Mapping 2017; JAMA Psychiatry 2019);

c) the use of population neuroscience and a lifespan approach to the evaluation of the associations between lifestyle, behavior, environmental, genetic and metabolic factors and brain structural and functional phenotypes (Experimental Neurology 2019; Molecular Psychiatry 2018);

d) application of ultra-high field neuroimaging for the identification of microstructural and fine-grained changes in brain organization (Neuroimage 2019; NPJ Schizophrenia 2019).

Dr. Frangou is an influential advocate for diversity in academic psychiatry with specific focus on closing the gender gap in publishing, funding and leadership. She is the editor and author of Women in Academic Psychiatry: A Mind to Succeed.