New Study Looks at Role of ARNT2 in Myelin-Producing Cells

An important goal in multiple sclerosis (MS) research is determining how to repair or preserve myelin, the protective sheath covering nerve fibres which is damaged in people with the disease.

This is not an easy task, considering the exact process by which myelin is damaged is still not well understood. To get a better grasp on this, a team led by Dr. Jacqueline Quandt has been studying the role of ARNT2. 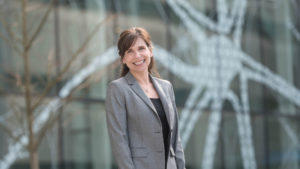 Past research has shown that the protein ARNT2, also known as aryl-hydrocarbon receptor nuclear translocator 2, is important in keeping neurons healthy. ARNT2 is a factor that turns other genes on or off, depending on the signals in the local environment. In a 2018 study, Dr. Quandt and her team found in mouse models of MS, at peak disease (in other words, when the mice are most disabled), up to 80 per cent of the ARNT2 protein was gone in spinal cord neurons. Digging deeper, they found that when neurons were grown in a dish and ARNT2 was deleted or knocked out, the cells survived just fine. But when stress was induced—specifically immune cell attack and inflammatory mediators which are thought to be key players in MS—the neurons had a harder time surviving. This provided another clue that neuronal ARNT2 was important in the disease.

But something else came out of this paper that was somewhat of a surprise—the researchers realized ARNT2 wasn’t only found in neurons.

“We found this protein was also expressed in two very important brain support cells: oligodendrocytes which are the cells that produce myelin, and astrocytes which respond when there is danger or damage in the nervous system,” says Dr. Quandt, DMCBH researcher and Associate Director of the UBC MS Research Group. “This got us excited because no one had really considered the role of ARNT2 in cells other than neurons before.”

In their latest paper, the team looked specifically at ARNT2’s role in oligodendrocytes, a type of cell found in the central nervous system responsible for producing the myelin sheath that covers axons and helps them function properly. They found ARNT2 levels in these cells drop as mice become disabled in mouse models of MS, and when they studied oligodendrocytes in a culture dish, knocking out ARNT2 increased the number of cells that produced myelin.

“What’s especially interesting is the field has always focused on neurons as well as myelin, with the mindset that MS is a neurodegenerative disease because neurons or their axons are lost, resulting in disability that is largely irrecoverable,” says Dr. Quandt. “And while this is true, an equally important contribution might be that there isn’t the myelin to support the neurons, and immune factors that alter ARNT2 may be influencing oligodendrocytes and their “growing up” or maturation to produce myelin. We now have a real hint that oligodendrocytes are being mobilized when ARNT2 is altered by immune mediators, so the excitement is now focusing on this protein’s potential in kickstarting the myelin repair process.”

We already know that families with children carrying mutations in ARNT2 have severely disrupted brain development, and that deleting ARNT2 is lethal shortly after mice are born. The immediate next step is figuring out which cells are most involved in ARNT2-mediated neuroprotection. To do this, Dr. Quandt is planning to study cell-specific ARNT2 knockout mice as a way of controlling deletion in neurons, astrocytes or oligodendrocytes throughout disease onset and progression and to test how tweaking ARNT2 in each of these cells might affect damage or repair.

“We’re now looking beyond the neuron to see the potential influence this protein has on the health of other cells involved in MS” says Dr. Quandt. “Highlighting a role for the ARNT2 protein in oligodendrocytes is a promising new focus in terms of remyelination and repair in MS and other neurological disorders”.

This work was funded by the MS Society of Canada and by philanthropic support to a Neuroprotection Fund through the VGH & UBC Hospital Foundation.