The idea of 3D printing a patient’s stem cells to develop and test personalized treatments is one step closer to becoming a reality. In her pioneering study, Vancouver Coastal Health Research Institute researcher and DMCBH associate member Stephanie Willerth lays the groundwork for a personalized medicine approach that could be applied to finding treatments for neurological diseases such as Alzheimer’s and Parkinson’s.

“This may well be the first study to combine cellular reprogramming with 3D bioprinting,” says Willerth, whose lab focuses on studying neural tissues. “I am excited to see how this research may evolve.”

“Our study shows how this technology could be used to develop human tissue models to identify approved treatments tailored to the individual clinical needs of patients.”

3D printing, aka stereolithography, dates back to the 1980s. Dr. Charles Hull hooked up a computer with modeling software to an ultraviolet light-emitting beam that dangled above a small-scale elevator filled with liquid photopolymer. The light beam hardened, or polymerized, layer upon layer of photopolymer in the shape of the object as clinicians lowered the elevator. The next generation of this additive manufacturing process replaced the light beam and vat of photopolymer with a mechanical arm that could pipe out layers of liquid, fast-hardening plastic in the form of the 3D object. 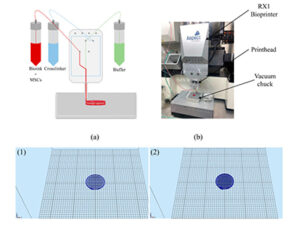 The bioprinter layers bioink that includes mesenchymal stem cells (MSC) onto a surface.

3D bioprinting is similar; however, it layers a bioink onto a matrix to create a scaffold of cells that can proliferate, or grow, into living tissues.

Treatments derived from printed tissues could soon become the norm

Willerth’s study—published in the journal Biomolecules—used an extrusion 3D bioprinter to pipe seven layers of a novel bioink onto a surface. The bioink was combined with mesenchymal stem cells (MSC) and the blood plasma protein fibrinogen made in the liver, along with alginate salts and other compounds. Stem cells are the building blocks of all cells in the body, and so can be used to create different tissues, and even organs and bone.

Willerth’s experiment printed neural tissues, which form the main part of our nervous system and are responsible for such things as motor skills and cognitive abilities. 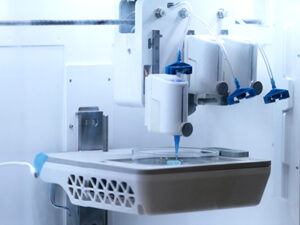 Willerth and her team use the BioX bioprinting machine to 3D print tissues.

“Our lab has done a lot of work with neural tissues, but not with printing cultured neural tissues,” says Willerth. “In this study, we were able to print tissues that function similarly to neural tissues found in the brain.”

Willerth is currently bioprinting with stem cells derived from Alzheimer’s patients to help track their symptoms. “If we can find a medication that could reverse symptoms in these tissues, we could potentially prescribe it back to patients.”

“Bioprinting tissues and testing the effectiveness of medications on them could be used to find treatments for many conditions, including cancers and neurological diseases.”

This model is also more cost-effective, says Willerth—a simple blood draw from a patient may be all that is required to produce tissue samples. It is also more accurate and less labour-intensive than using animal models, she adds.

“When we use actual patient cells, we have human biology to improve the accuracy of the tests.”

Medication screening for conditions such as Alzheimer’s are not as robust as they could be, says Willerth, who has seen the effects of the disease first-hand through her grandparents. A personalized approach could test multiple drugs to target the disease morphologies specific to each patient much faster.

3D printing biotissues of the brain and spinal cord are still emerging areas, notes Willerth. Now, thanks to research, “our lab can not only bioprint, but we can keep these tissues for a long time and characterize them. And they do actually resemble the tissues that you would find in the brain or spinal cord.”

Dr. Stephanie Willerth is a principal investigator at the International Collaboration On Repair Discoveries, a member of the Centre for Advanced Materials and Related Technology and an associate member of the Centre for Brain Health. She is an affiliate professor with the School of Biomedical Engineering at the University of British Columbia, and a professor and Canada Research Chair in Biomedical Engineering at the University of Victoria (UVic).

This story was originally published on the Vancouver Coastal Health Research Institute website.