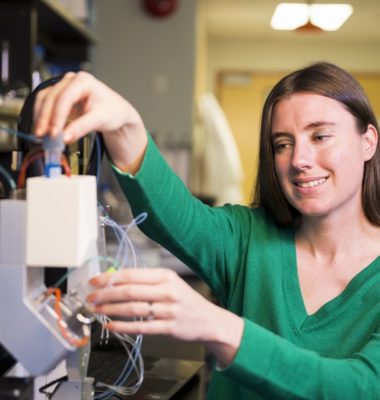 Dr. Willerth holds a Canada Research Chair in Biomedical Engineering at the University of Victoria where she has dual appointments in the Department of Mechanical Engineering and the Division of Medical Sciences as an Associate Professor. She currently serves as the President of the Canadian Biomaterials Society, a Lab Scientist at Creative Destruction Labs, and on the steering committee for the B.C. Regenerative Medicine Initiative. She served as the Acting Director for the Centre for Biomedical Research at the University of Victoria during 2017. Her honors include being named a Woman of Innovation in 2017, one of the 2015 Young Innovators in Cellular and Biological Engineering and a “Star in Global Health” by Grand Challenges Canada in 2014. She spent Fall of 2016 on sabbatical at the Wisconsin Institute for Discovery supported by the International Collaboration on Repair Discoveries International Travel Award where she wrote her book “Engineering neural tissue using stem cells” published by Academic Press. She completed her postdoctoral work at the University of California-Berkeley after receiving her Ph.D. in Biomedical Engineering from Washington University. Her undergraduate degrees were in Biology and Chemical Engineering from the Massachusetts Institute of Technology.