From a young age, Derek Yu had always wondered how the world works, and how people work. After reading the Harvard Gazette article “It’s Not Easy Being Your Brain,” he was curious to learn more about how the brain works.

While looking for potential opportunities to study neuroscience, Derek came across the Vancouver Brain Bee, a competition for grade 9-12 high school students designed to stimulate interest and excitement about brain research. Students are tested on their knowledge of the brain and neuroscience research, ranging from topics such as memory, sleep, emotion, perception, aging and genetics.

The Brain Bee is held in over 35 countries around the world, with local, national and international competitions, In Vancouver, it is jointly hosted by the Djavad Mowafaghian Centre for Brain Health, UBC Neuroscience Trainee Association, Life Science Institute Neuroscience Research Group and BC Chapter of SfN.

“I figured that there was no better way to learn about such a vast and potent field than to compete in it,” says Derek. “I began to pour over the countless pages of study material and just the pure experience of learning so much new knowledge was a fascinating experience for me.”

Derek went on to win the Vancouver Brain Bee and was one of 13 regional finalists who competed in the CIHR Canadian National Brain Bee. The competition was composed of a variety of questions that each participant had to answer in real-time and within a relatively short time limit.

While he found the experience both thrilling and nerve-racking, Derek did quite well, placing fourth in the national competition. He is already looking forward to competing in the Brain Bee again next year and perhaps getting the chance to represent Canada at the international competition.

Inspired to continue pursuing his interest in neuroscience, he reached out to the DMCBH where he found an opportunity to volunteer in Dr. Kurt Haas’ lab. Over the summer, he was exposed to the various different microscopes and technology used in the lab and learned about single cell electroporation, a method of injecting macromolecules into the brain to monitor the development of individual neurons and their components.

“Being immersed in a lab environment has made me realize that scientific research can be every bit as wondrous and remarkable as well as downright frustrating,” says Derek. “I now realize that perhaps more than any other profession, scientists must be able to re-hypothesize and repeat experiments countless times, many of which end in some type of failure. However, I think that the beauty of science is that one success can lead to incredible outcomes.”

After graduating from high school, Derek hopes to pursue a neuroscience major from one of the field’s top institutions, such as MIT, Harvard University, Stanford University, John Hopkins University, and of course, UBC, among others. 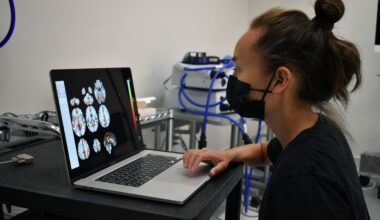 Growing up, Dr. Sarah Kraeutner liked to build things and had always wanted to...