Dr. Manu Madhav joined the Djavad Mowafaghian Centre for Brain Health this week, in a joint recruitment between the Centre and the School of Biomedical Engineering! Dr. Madhav is originally from Kerala, India and moved to the United States in 2008 to do his Master’s in Mechanical Engineering at Johns Hopkins University. He went on to do his Ph.D. in this same field and most recently worked as an Assistant Research Scientist under the mentorship of Drs. James Knierim and Noah Cowan.

We spoke with Dr. Madhav to learn more about his interests and why he’s excited to be joining the UBC and DMCBH community.

As someone with a background in mechanical engineering, what got you interested in neuroscience?

My PhD project was technically in mechanical engineering but most of my work had to do with animal behaviour. I was looking specifically at how certain species of fish interact with each other by using electricity as a medium of social communication, with the intent of understanding how their brains process these signals and express these in forms of communication. Of course, all of this relates to neuroscience, so I ended up becoming very interested in exploring the brain itself.

What will your research at UBC be focused on?

The overarching goal of my research will be looking at algorithms for neural navigation. The question my lab will be trying to answer is what kind of sensory inputs animals use in order to create spatial maps in their brains and whether the task or goal an animal has (such as finding food, for example) has anything to do with how they construct this map.

It’s important to clarify what I mean when I say map. We often think of a map as an overhead view of a place, like north, south, east and west, but many variables can be incorporated into making a map. There is general understanding that rats and humans are not just constructing a map of space, but rather of things they’re interested in with respect to what they want to do with certain information. Our lab will be focused on figuring out whether constructing a map in a flexible way allows animals to complete tasks more effectively.

The second part of my research will be determining how this map is actually being used to navigate or complete a task, which is where my robotics background comes in. My lab will construct a large maze whose configuration can change dynamically. Animals will be given different levels of information about the goal location and the maze will change. By recordings from their brains, we can see how the internal map they’ve constructed is modified and how it is being used with these different qualities of task-relevant information.

In what ways is this research unique?

It’s been known for a long time that rats create a so-called ‘cognitive map’ in their brain, but what we don’t know is what happens to this map or to spatial navigation during more complex tasks. In other words, when you get a rat to do something more complicated than just running around to find food, the structure of the map becomes more complicated and it’s still unclear how it’s being used in these instances.

Our lab will also study humans by getting people to use robots and virtual reality to find their way through the same maze that the animals ran in, using the same sensory information the animals had access to. This will allow us to behaviorally compare the map being created in a human brain versus an animal brain, and the strategies they employ to navigate the maze.

What impact can this work have on better understanding neurodegenerative diseases?

Some regions of the brain that we will be looking at, such as the entorhinal cortex and the hippocampus, are among the first to be affected in neurodegenerative dementias such as Alzheimer’s disease. We have known for a long time that there is a relationship between our brain’s mapping of the world and our ability to create new memories. For example, the cognitive map is hypothesized to be used as the framework onto which newly formed memories are anchored, which suggests that memory and mapping are intimately related. By better understanding how we form maps, we can understand a lot about how we form memories and how this ability is degraded in people living with Alzheimer’s and dementia.

What are you most excited about in terms of moving to Canada?

I’ve only ever visited Canada twice, and I was blown away by how beautiful Vancouver is. I’m very much into nature and outdoor activities like climbing and hiking so I’m excited for the opportunity to do these on a regular basis. In terms of UBC, my interactions with faculty and staff have been extremely positive and I already feel very supported, which is a great feeling to have when you’re moving to a new country! We are saddened to hear about the recent passing of Dr. Pat McGeer, who... 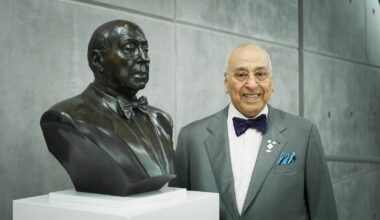 The Djavad Mowafaghian Centre for Brain Health is saddened to learn of Dr. Djavad...

The Djavad Mowafaghian Centre for Brain Health is pleased to announce that Dr. Miriam...