Untangling the brain’s “wires” in the virtual space

The brain’s cells interact with one another in a very dense environment, some of them rearranging the exquisite network of cells when pruning old bits of neuron to form new connections and stronger lines of communication, or when repair is needed following injury. It is a dynamic process, and images in a textbook cannot convey the complexity of cell-to-cell interaction within the brain; it is a spectacle few outside of a neuroscience research lab will ever get to see. That is, until now.

Researchers in Dr. Brian MacVicar’s and Dr. Fidel Vila-Rodriguez’s labs at the Djavad Mowafaghian Centre for Brain Health have partnered with Dr. Claudia Krebs to build on her successful Holographic Brain Project. The project brings neuroanatomy to life in virtual reality, giving students the ability to visualize the brain as a three-dimensional (3D) image, enabling them to explore, highlight, isolate, and rotate the structures within the brain. The project makes neuroanatomy approachable, and offers new perspective on the brain’s structure and spatial relationships.

”When I first visualized fMRI data at work in 3D at Dr. Krebs’ lab my jaw dropped,” says Dr. Vila-Rodriguez. “Seeing it was an ‘aha’ moment, reminiscent of times as child when I realized I had comprehended something new about the world.”

The fMRI images were gathered from a clinical trial studying the effects of transcranial magnetic stimulation in treating depression conducted at NINET lab. The next step will be to visualize well-defined brain networks over time in VR, and explore neuroanatomical correlations on high-resolution anatomical head MRI. 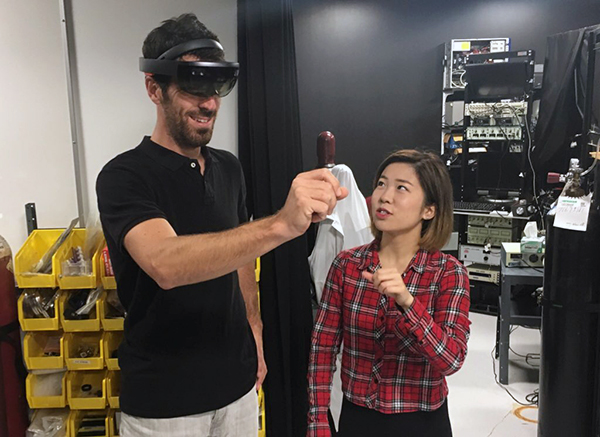 Dr. Louis-Philippe Bernier, a research associate in Dr. MacVicar’s lab, has been working with Dr. Krebs’ team to overlay the 3D brain with images and videos of the brain’s glial immune cells, microglia, and vasculature to provide a more detailed look at the brain’s “wiring.”

“Having a 3D visualization of multi-cell interaction will help up demonstrate how the brain really works,” says Dr. Bernier. “By offering a glimpse at how our cells communicate and work together, this tool is going to give the next generation of students a richer understanding of how the brain functions in health and disease.”

The cellular images for the next stage of the Holographic Lens Project were obtained using two-photon microscopy in the MacVicar lab and will be overlaid on the existing holographic brain imagery. Along with clinical MRI images, the Holographic Lens Project will provide a comprehensive view of the brain, from macroscopic brain regions to microscopic cellular imaging. Students learning about the brain will be able to walk through the different brain areas and interact with data from living tissue, providing a more comprehensive understanding of neuroanatomy than has been possible until recently.

Dr. Krebs has been a leader in bringing mixed reality into the lab. In 2017, she partnered with Microsoft to bring the Holographic Brain Project to UBC via the HoloLens web application. In 2018, the app will be available on Google Cardboard, making it accessible to anyone with a sense of curiosity about the body’s most mysterious organ.

Dr. Krebs, a professor of anatomy in the Faculty of Medicine, believes augmented reality will help establish deeper understanding of the brain’s architecture.

“There’s no denying that the human brain is extremely complicated and that makes neuroanatomy difficult to learn and teach,” said Dr. Krebs. “We’re very excited to be introducing the world of mixed reality into the classroom, and looking forward to adding to our existing tools in collaboration with researchers across campus.”

“Being able to really see and understand complicated neural structures is incredible,” says Dr. Bernier. “This project will give students a richer perspective on neuroanatomy, which can only benefit research in the future. I’m excited to participate in this.”