Scientists at the Djavad Mowafaghian Centre for Brain Health have identified a couple of crucial steps in the formation a protein called amyloid beta, which accumulates in clumps, or “plaques,” in the brains of people with Alzheimer’s disease. Those discoveries inspired efforts at disrupting the biochemical carving of amyloid beta’s precursor protein into its final, toxic shape.

The latest drugs being tested try to silence an enzyme, called BACE1, that cuts the precursor protein. But BACE1 has other functions that are beneficial, so stopping it altogether could bring unwanted side effects – including disrupting the production of myelin, the protective insulation of brain cells.

Psychiatry Professor and Alzheimer’s researcher Dr. Weihong Song has found that changing where the cut is made – in effect, guiding the enzyme’s scissors to a different point – could achieve the same goal, with less collateral damage.

Song built upon two discoveries in the past decade of two rare mutations: one, found in Italian people, that leads to early onset Alzheimer’s disease, and another, found in Icelandic people, that staves off Alzheimer’s disease. Dr. Song’s team was particularly intrigued by the diametrically opposite effects of both mutations because they affected the same point on the precursor protein’s chain of 770 amino acids, swapping one acid for another.

As Dr. Song and his team describe in the July 19 issue of the Journal of Neuroscience, they injected one set of mice with a virus carrying the Italian gene mutation, and another set with the Icelandic mutation.

They found that the amino acid substitution affected where the precursor protein was cleaved. The Icelandic mutation resulted in a shortened form of amyloid beta, which does not become “sticky” and turn into plaque. The Italian mutation produced a longer, “stickier” version of amyloid beta, which ultimately becomes neuron-smothering plaque.

Actually, the effects were a matter of degree: Each mutation led to more cuts in one location or more cuts in the other location. But in the gradual degradation of Alzheimer’s disease, that could be enough – reducing the levels of the offending toxin could translate into many more years of life before cognitive decline sets in.

“If we can adjust where BACE1 cuts the precursor protein, we will have a very precise way of slowing the build-up of plaque in the brain, without affecting other processes,” says Dr. Song, a Canada Research Chair in Alzheimer’s Disease and the Jack Brown and Family Professor. “This provides a new target in our search for a drug – instead of sledgehammer, it’s more like a scalpel.” 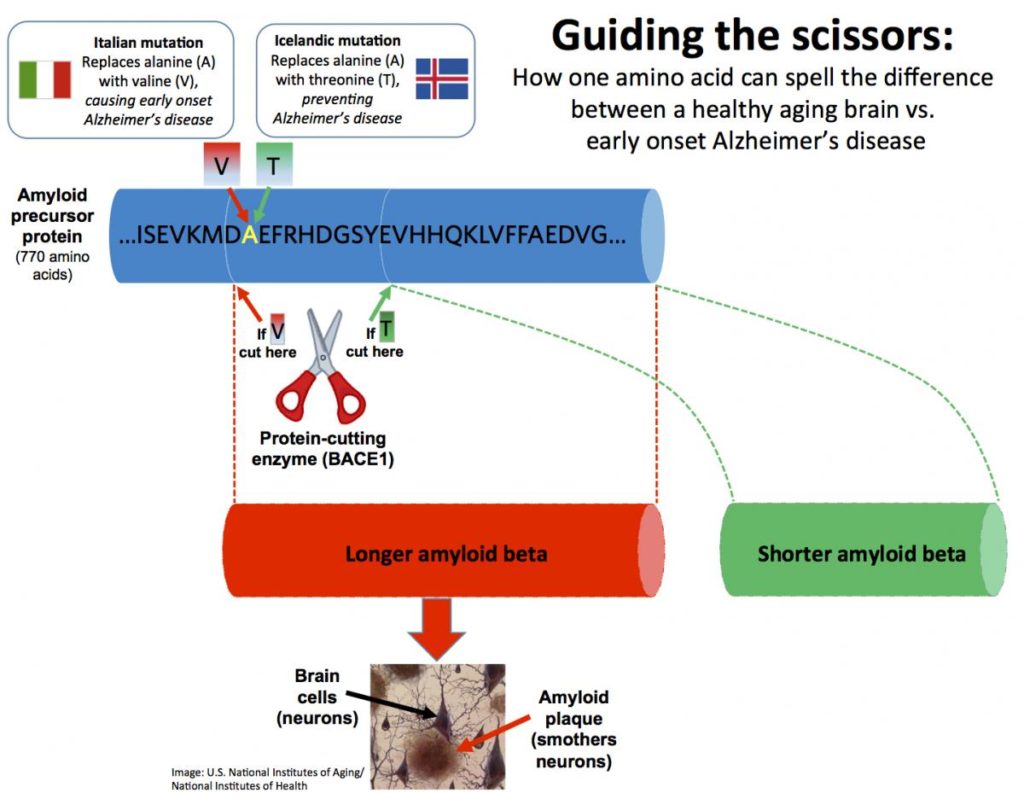