For Sharon Roman, the story is personal

“I don’t pretend—and would never presume—to speak for all patients, or anyone but myself,” says Sharon Roman. “I can only offer my own experience.” 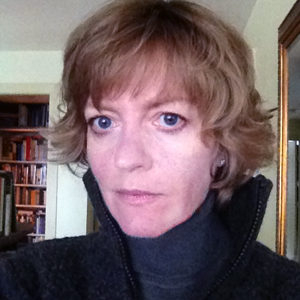 For Roman (pictured, right), who lives with Multiple Sclerosis (MS), storytelling is a way of contextualizing her experience both as a patient in the MS clinic at the Djavad Mowafaghian Centre for Brain Health and as someone living with a chronic condition. And though she would decline to be the voice of the larger MS community, her words have impact: she has now contributed five columns to the British Medical Journal on her experience as a patient and person living with MS.

She writes each column by hand, using a fountain pen for steadier strokes. And despite her modest approach, she’s become an influential voice for physicians in clinic and online.

“I realized I had a lot to say about my experience,” says Roman, who finds some of her inspiration from the relationships she forms within the healthcare system.

“I don’t need a hug,” she wrote in August. “But I do ask for solicitude and compassion.”

With that in mind, Roman has written about a range of experiences, from the qualities that make a good doctor to her perspective on patient inclusion. In her August 2017 column, she wrote (of being given a diagnosis by her physician) that “while it may have been a long day for you, it will be an even longer one for your patient.” She writes candidly, weaving stories of her and her husband’s experiences with accessing the healthcare system with common-sense advice for doctors.

Shortly after her diagnosis at age 30, she went from her doctor’s office to the local medical student bookstore, where she bought an armful of neurology textbooks. Determined to understand as much as she could about her diagnosis, she filled them with highlighter marks and sticky tabs to refer to so that on her next visit she’d know the right questions to ask.

“One of the best things a doctor can say to me is ‘that’s a good question,’” she says. “In my experience, a good physician won’t mind a few extra questions, and as a patient, it makes me feel appreciated when someone takes the time to address some of my concerns, whether that’s about a new medication or anything else.”

In September, she published a piece on how she feels if she’s in good hands. She describes the characteristics of a good doctor: “taking me seriously and not dismissing me” and the humility to admit when the answer to a patient question is “I don’t know.”

“I want to be encouraged to participate in my care, to not merely be the subject matter in a given appointment,” she says. “Someone can have encyclopaedic knowledge of neurology, but if there’s no connection, I might be left feeling cold.”

In a recent BMJ column by Miriam Fine-Goulden, a clinical fellow in pediatric cardiac intensive care, Roman’s perspective is cited as valuable; “Patients know how to measure the value of their clinicians. In a recent, beautifully written account, Sharon Roman articulated the qualities that she believes make a good—and exceptional—doctor; knowledge being “an obvious beginning but by no means the end.” Taking patients seriously, being honest, making people feel safe—“not only cared for but also cared about.” It is advice so simple as to seem redundant, and yet the relationship between patient and doctor is so personal, with an imbalance of power and expertise, that it bears repeating for those who would occasionally forget. Indeed, Roman’s is sound advice, and advice that physicians around the world are now putting to practice.

Roman herself never intended to write this extensively on the topic of doctor-patient relationships—she views the act of writing itself as a sort of “purge” when something sparks an idea, a brain-clearing exercise not unlike sweating it out at the gym.

“I am grateful for this new direction,” she says. “I do hope through writing that I might make a difference in someone else’s life through a doctor reading about my experience. I’m thrilled that people are reading what I’ve written.”

As to her relationship with her clinicians at the MS Clinic, who include Dr. Reebye and Dr. Traboulsee?

“Patients like Sharon help heal our tired souls, says Dr. Traboulsee. “They re-affirm the values we should hold dear and close to our chest.”

“I know I’ve found a good fit with a doctor when I feel comfortable sharing something I’ve written,” she says, laughing. “The MS Clinic doctors keep encouraging me!”

From a young age, Derek Yu had always wondered how the world works, and...