A simple compound is showing promise in limiting disease progression in multiple sclerosis (MS), reducing relapse rates and new disease activity significantly in mice. According to new research from Dr. Jacqueline Quandt (pictured), published recently in Brain, Behaviour and Immunity, the compound alters immune responses without eliminating cells and in doing so protects the cells in the nervous system and prevents the underlying neurodegeneration in models of MS.

The compound, called TEMPOL, is a stable free radical with anti-inflammatory properties. TEMPOL passes readily into the tissues and cells where it can neutralize unstable free radicals and protect against damage from oxidization. This “oxidative stress” is thought to be a significant contributor to MS progression. The compound is both immunomodulatory and protective in that it modifies the response of immune cells without eliminating them and seems to limit damage in the nervous system itself. 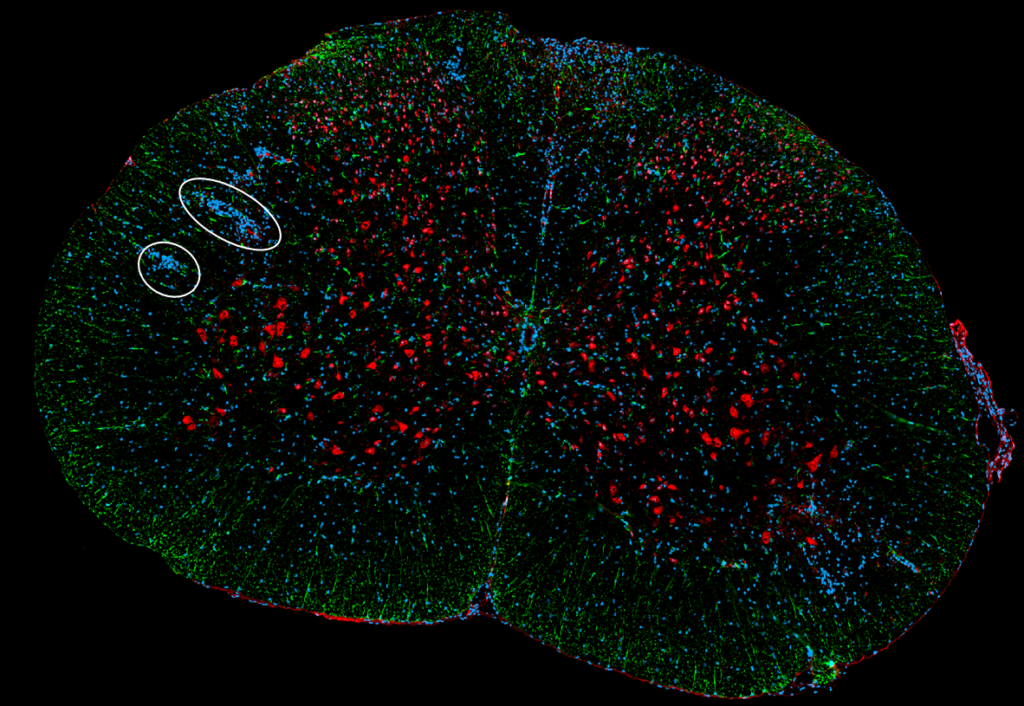 Pictured: cross section through the spinal cord of a mouse with an MS-like disease. Disability in MS is associated with the loss of neurons (neurodegeneration) and the axons which extend along the length of the spinal cord (shown in red). Despite attempts by glial support cells (in green) to limit damage, immune cells enter the brain (circles or patches of cells) and can cause damage directly or by producing immune factors that cause trouble. TEMPOL given orally reduced the number of immune cells in the spinal cord and protected axons throughout the spinal cord.

The study demonstrated that the compound is effective in several experimental animal models to prevent and treat established disease when taken orally. If proven clinically effective, this has the potential to provide significant relief to MS patients.

“Our study is the first to provide robust evidence that oral TEMPOL may be effective in preventing disease and limiting MS progression,” says Dr. Quandt. “Progression of MS seems to come from an underlying degeneration of axons and neurons; our hope was that TEMPOL would protect against neurodegeneration and axonal loss. We’re excited that we can now show that we can prevent disability by protecting those cells in the brain.”

TEMPOL has already shown promise in human trials related to radiation-induced alopecia and is moving forward in trials against mucositis and peripheral neuropathy, among others, but its neuroprotective potential is intriguing researchers across the neurodegenerative disease spectrum.

“Protecting the cells in the target tissue while halting disease processes and affording neuroprotection makes TEMPOL seem like the ‘holy grail’ for MS treatment,” says Dr. Quandt, who is now partnering  with other researchers at the Djavad Mowafaghian Centre for Brain Health to better understand how the compound is interacting with brain and immune cells at the genetic  level.

“It’s still very early, but we’re looking beyond inflammation and hopeful that what we’ve found has promise,” says Dr. Quandt. “Our goal is to limit damage and disability without shutting down the immune system—thus putting less strain on the brain; we’re optimistic that we’re on the right track.”