A protein that was once thought to be involved in only hereditary cases of amyotrophic lateral sclerosis (ALS) evidently misfolds in all cases of ALS, finds new research from Dr. Neil Cashman’s laboratory.

Superoxide dismutase 1 (SOD1) normally acts as the first line of defense against cell oxidation; however it gains toxic properties when misfolded in disease, causing cell death. When the wild-type SOD1 protein misfolds, it can propagate between cells resulting in a prion-like spread of ALS through surrounding cells. ALS is a progressive and ultimately fatal neuromuscular disease that eventually paralyzes limbs and muscles of speech, swallowing and respiration. There is no cure, and only limited treatment options are available to patients with the disease.

In 2012, researchers in Dr. Cashman’s laboratory demonstrated that misfolding of wild-type SOD1 can be triggered by pathological forms of transactive response DNA binding protein 43 kDa (TDP-43), a common feature in ALS. This new discovery, however, demonstrates that this species of misfolded SOD1 (that is present in up to 98 per cent of ALS patients) is an obligate seed and substrate of propagated misfolding of SOD1.

“What we’re seeing is an active conversion process,” says Eddie Pokrishevsky, a PhD candidate in Dr. Cashman’s lab and the first author on the paper, which was published recently in the journal Scientific Reports.

“We believe SOD1 to be the final agent that propagates the disease from cell to cell, but it’s not acting alone. Now that we are starting to understand the role of TDP-43 in this pathological process, it gives us new targets to potentially stop the spread of disease through the nervous system.”

The researchers were able to reduce the burden of propagated protein misfolding of SOD1 between cells by 50 to 80 per cent, which suggests that triggered misfolding could potentially be prevented in some cases.

“Our hope is that with this new understanding of SOD1, we can intervene in ALS and other neurodegenerative diseases, including Parkinson and Alzheimer disease,” says Pokrishevsky. “There may be similar mechanisms of disease, and, with any luck, there will be similar ways to target these mechanisms and slow or reverse their damage.” 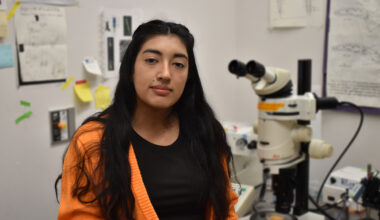