For the past three years, Dr. Terrance Snutch and research associate Dr. John Tyson have been working with Oxford Nanopore Technologies (ONT) to develop a novel deoxyribonucleic acid (DNA) sequencing tool with promising implications for personalized medicine. About the size of a mobile phone, the MinION device is a USB-powered DNA sequencer capable of mapping complex genomic structures; with it, researchers were recently able to assemble a complete human genome using reads hundreds of times larger than has previously been possible with conventional methods.

“This technology enables us to look at longer strands of DNA, reducing some of the complexity of ‘piecing together’ a person’s genetic information,” explains Dr. Snutch, Director of Translational Neuroscience at the Djavad Mowafaghian Centre for Brain Health. “Longer, more detailed reads of human DNA offers researchers exciting potential for new biological insights.”

Drs. Snutch and Tyson collaborated with scientists at the University of Toronto, and research labs in the United Kingdom and United States to generate and piece together the data produced using the ONT MinION sequencer. The pocket-sized tool (pictured below) sequences the DNA by detecting the change in current flow as single molecules of DNA pass through a nanopore – or tiny hole – in a membrane. 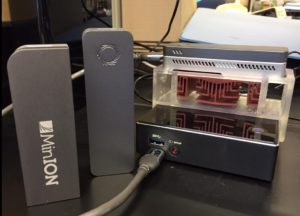 According to a new paper published today in Nature Biotechnology, MinION represents a breakthrough in sequencing previously uncharacterized regions of the genome. The team used this method to generate the longest read of the human genome ever sequenced, producing a data strand 8,000 times longer than a typical sequencing read and the most complete human genome assembled with a single piece of technology.

Just under 25 per cent of base human genomic data came from Dr. Tyson’s work at UBC.

“This new sequencing platform provides opportunities to understand the structure of previously uncharacterized genomes – and to expand those previously characterized – through the ability to sequence very long single DNA strands,” explains Dr. Tyson, a lead co-author on the paper. “With the ability to re-assemble a genome ‘picture’ from much larger pieces, and with the ability to directly measure changes in the genetic blueprint, we’re looking forward to a very interesting and productive future for this technology in many fields of medicine, including brain research, cancer and infectious disease.”

The first human genome sequence map was completed in 2003 after a massive international collaboration that spanned 15 years and cost USD $3 billion. Although declared complete in 2003, it still contained over 700 gaps that had not yet been sequenced. The use of the MinION sequencing device opens the door to low-cost sequencing of new large complex genomes, such as cancer cell genomes which are frequently rearranged and vastly different from the reference genome required for short-read sequencing approaches.

“We’re able to see structural arrangements in the genome that we couldn’t see before,” says Dr. Snutch. “These insights offer us a great deal of hope, bringing us closer to a future in which large swaths of genetic information inform clinical practice, as well as disease prevention and treatment.”

The development of the MinION platform and human genome sequencing in Dr. Snutch’s lab was supported by the Canadian Institutes of Health Research, the Michael Smith Foundation for Health Research, Genome B.C., and the Koerner Foundation.