Delineating different decision duties for dopamine in the frontal lobes

“Sometimes you have these big ideas, and then five years pass and it turns out your idea was almost exactly right,” says Dr. Stan Floresco, researcher with UBC’s Department of Psychology and Djavad Mowafaghian Centre for Brain Health. “We had a theory that the way dopamine was modulating actions and behavior in the striatum might be taking place in the prefrontal cortex (frontal lobes).” Published recently in The Journal of Neuroscience, this finding represents several years of work and is a milestone for the Floresco lab. 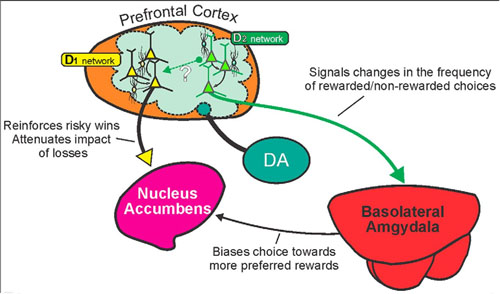 Dopamine is a neurotransmitter that invigorates and refines goal-directed behaviour, and plays a significant role in decision-making. Dr. Floresco and graduate student Nicole Jenni looked into the way that different dopamine receptors – D1 and D2 – affect sensitivity to risk and reward.

The frontal lobe is the part of the brain responsible for executive function: decision-making and problem-solving, memory, judgment, and impulse control. Dopamine in the frontal lobe regulates a variety of these functions, but Dr. Floresco’s team found that D1 and D2 receptors can produce variable outcomes by acting on separate “micro-networks” of neurons within the frontal lobe. D1 receptors affect persistence of behaviour, whereas D2 receptors facilitate flexibility in decision making. These different effects seem to occur via actions on separate groups of cortical neurons that interface with distinct subcortical systems in the ventral striatum (a region beneath the frontal lobe) and the temporal lobe (specifically the amygdala, a nucleus involved in emotional and value processing).

“It’s important to identify the neural circuits that dopamine acts on,” explains Dr. Floresco. “By clarifying the way that dopamine receptors in the frontal lobe mediate patterns of behaviour, we can better understand the underlying symptoms of disease.”

Researchers have begun thinking about disease more broadly, with less emphasis on diseases as syndromes –  conditions characterized by specific correlating symptoms –  and more on symptom clusters, which can be similar across a variety of disorders. By clarifying the role of specific neurotransmitters and their receptors, Dr. Floresco’s team hopes to be able to find a neural basis for treating symptom clusters at the cellular level.

“In depression, for example, symptoms can include fatigue, lethargy and reduced appetite, or they can manifest as agitation, insomnia, and increased appetite,” says Dr. Floresco. “Is the same process causing different symptomatic outcomes in two different people? We don’t think so, and that’s what we’re setting out to understand.”

Dr. Floresco hopes that his research will have implications for depression and schizophrenia therapeutics; dysfunction in dopamine processing in the frontal lobe affects both disorders. By looking at regional networks of neurons, the Floresco lab hopes to identify specific patterns of behaviour for different regions of the brain.

“I don’t think we’re going to get to a grand, unifying theory of what dopamine is or isn’t, but this idea that maybe by understanding the different functions of distinct neural networks and how they interface with each other, maybe we’ll get to a place where we can improve outcomes for those with dysfunction in the prefrontal cortex,” says Dr. Floresco.