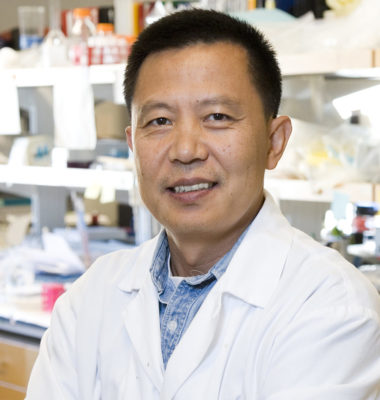 Dr. Yu Tian Wang obtained his Ph.D. in neuroscience in 1992 from Memorial University, Canada and both B.M (Medicine) in 1982 and M.Sc. (Physiology) in 1985 from Shandong University Medical School in China. He worked in the Department of Laboratory Medicine and Pathobiology at the University of Toronto as an Assistant, and then Associate Professor between 1994 and 2001. He is currently a Professor in the Department of Medicine and the Djavad Mowafaghian Centre for Brain Health at the University of British Columbia and the holder of the Heart and Stroke Foundation of B.C. & Yukon Chair in Stroke Research. He is also a Howard Hughes Medical Institute International Scholar between 2001-2011 and a Fellow of the Academy of Sciences of Royal Society of Canada since 2006.

The goal of the long-term research program in my laboratory is to understand mechanisms controlling the efficacy of synaptic transmission via the regulation of postsynaptic receptors and the manner in which disease processes alter these mechanisms.

Study of the mechanisms governing membrane trafficking of postsynaptic ionotropic receptors is critical to our understanding of synaptic plasticity, and hence brain physiology and pathology. In particular, our research focus on excitatory amino acid (EAA) and type A gamma-aminobutyric acid (GABAA) receptors, given that these are the principal receptors mediating excitatory and inhibitory synaptic transmission in the brain.

Expression of recombinant receptors in heterologous cell lines allows us to use various molecular techniques and characterize in detail the molecular mechanisms controlling the processes by which these receptors are trafficked. We then study these mechanisms in a physiological context by extending our results to neurons in primary dissociated cultures, brain slices, and the brains of animals as a function of behavior.

The goal of our research is, ultimately, to be able to treat central nervous disorders, such as cerebral ischemia and epilepsy, by designing new therapeutics which specifically target these receptors and their pathways.