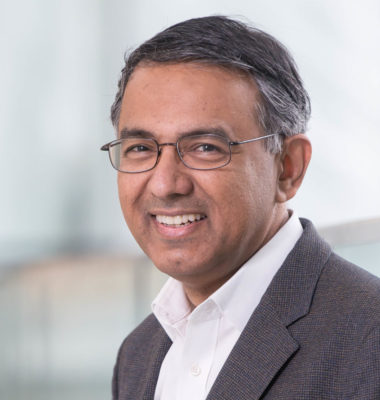 Dr. Subramaniam received his Ph.D. in Physical Chemistry from Stanford University and completed postdoctoral training in the Departments of Chemistry and Biology at the Massachusetts Institute of Technology. He began his independent research career at the Johns Hopkins School of Medicine, first as Assistant Professor, and then as Associate Professor before he moved to the National Cancer Institute, NIH as Senior Investigator and Chief of the Biophysics Section in the Laboratory of Cell Biology in the intramural program of the National Cancer Institute.

He has published over 177 peer-reviewed research publications, including journals such as Cell, Nature and Science. He has a career h-index of 58, and his publications have been cited over 12,340 times. His research contributions have been recognized by recent major awards and nominations including the National Cancer Institute Research Highlights Award (2013), Federal Technology Transfer Award (2015), NIH Director’s Award for Scientific Excellence (2015), Orloff Award from NHLBI, NIH for outstanding scientific contribution (2016), election as Fellow of the Biophysical Society (2018), and nomination for the Breakthrough Prize in the Life Sciences.

Dr. Subramaniam is globally recognized for his leading contributions in cryo electron microscopy (cryo-EM). He was the first to demonstrate atomic resolution cryo-EM of proteins, first to demonstrate atomic resolution small molecule drug mapping, and first to demonstrate the use of cryo-EM in precision medicine with structure of a drug bound to a patient mutant in cancer. His work led the field in showing that the structures of protein targets of a variety of clinical interest could be determined at high resolution using cryo-EM. Predictably, his expertise in harnessing the methodological advances in cryo-EM, its use to dissect multiple conformational states, with the computational tools at UBC to analyze protein dynamics will prove to be powerful for the effective identification of potentially new therapeutic targets.