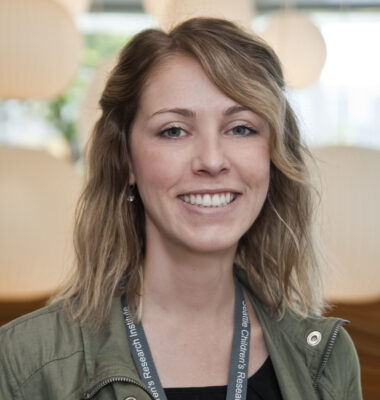 Dr. Jessica Rosin completed her Ph.D. with Dr. John Cobb at the University of Calgary (UofC), where she studied the role of regulatory elements in contributing to Shox2 gene function in rodents, with a specific focus on the role of Shox2 during limb, cerebellar, and facial motor nucleus/facial nerve development. For her first Postdoctoral Fellowship (PDF), Dr. Rosin joined the laboratory of Dr. Eric Turner at Seattle Children’s Research Institute (SCRI), where she examined how different regulatory regions act in concert to coordinate proper Hmx1 expression and function during pinna and lateral facial morphogenesis. Upon completion of her first PDF, Dr. Rosin switched her focus from gene regulation and transcription factor studies to understanding cellular heterogeneity, and particularly how a single cell type could act in different contexts to shape an organ, such as the fetal brain. In order to ask this question, Dr. Rosin joined the laboratory of Dr. Deborah Kurrasch at the UofC for her second PDF, where her work has demonstrated that embryonic microglia are critically important for the development of the brain. Dr. Rosin was the first researcher to show that the embryonic hypothalamus is comprised of a heterogeneous population of microglia that are altered in a sexually dimorphic manner following gestational stress. In July 2021, Dr. Rosin was recruited to the University of British Columbia (UBC) as an Assistant Professor. Her lab is currently focused on immune regulation of developmental programs and how gestational perturbations such as maternal stress impact fetal development.

The processes governing proper development of the embryo are being recognized as increasingly complex in nature and highly sensitive to the maternal environment. As a new investigator at UBC, Dr. Rosin’s research aims to understand how distinct populations of microglia, the resident macrophages and phagocytic immune cells of the CNS, signal to nearby cells during embryogenesis to contribute to normal development of the brain, with a specific focus on the hypothalamus. Her research is also targeted at determining how exposure to various types of gestational perturbation, such as maternal stress, disrupt microglial functions to alter normal developmental programs and result in neurodevelopmental disorders. As Dr. Rosin’s previous work demonstrates that embryonic hypothalamic microglia play an unappreciated role in translating maternal stressors to sexually dimorphic perturbation of neurodevelopmental programs, her lab is currently interested in HOW these neurodevelopmental perturbations arise in response to maternal stress. Dr. Rosin’s lab employs a variety of experimental approaches to identify unique cell types and the means through which they interact with or molecules they use to signal to nearby cells within their surrounding environment. By disrupting these intricate cellular interactions using genetic knockout lines, pharmacological inhibitors, and/or environmental insults that perturb the system, her lab is able to study how altering normal developmental programs impacts circuitry and behaviour.