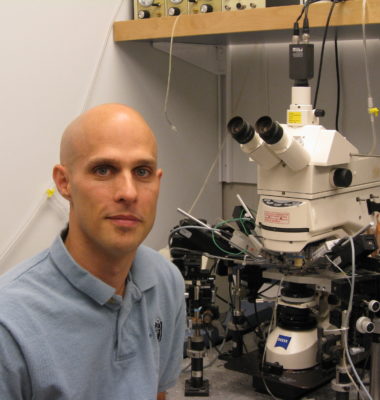 Dr. Seamans’ main research interest lies in a part of the brain known as the Anterior Cingulate Cortex (ACC). There is no consensus on what the ACC actually does, although there are no shortage of theories. On one hand, functional imaging has shown that the ACC is “activated” during a staggering array of cognitive and emotional tasks. On the other hand, when the ACC is surgically removed (anterior cingulotomies) in human patients for the treatment of severe cases of obsessive compulsive disorder, chronic pain or depression, no lasting detrimental effects on cognition, memory or emotional expression occur.

Dr. Seamans’ lab takes a reductionistic approach to understanding this mysterious brain region. This involves simultaneously recording from many ACC neurons as animals perform various cognitive or emotional tasks. They then apply sophisticated statistical and machine learning techniques to extract meaningful signals from the jumble of activity. Typically, the team finds that ACC neurons can represent almost anything (e.g. stimuli, actions, outcomes and emotional states) but perhaps more interesting is that these representations morph or change with changes in context. Because we believe the morphing relies on neuromodulators such as dopamine and serotonin, Dr. Seamans uses powerful optically-based tools (e.g. optogenetics and fluorescence imaging) to tract fluctuations in these modulators.

By studying how ACC neurons represent cognitive and emotional information and what causes these representations to change, Dr. Seamans’ lab hopes to better understand what the ACC normally does, and how dysfunction of the ACC might contribute to severe psychiatric disorders.